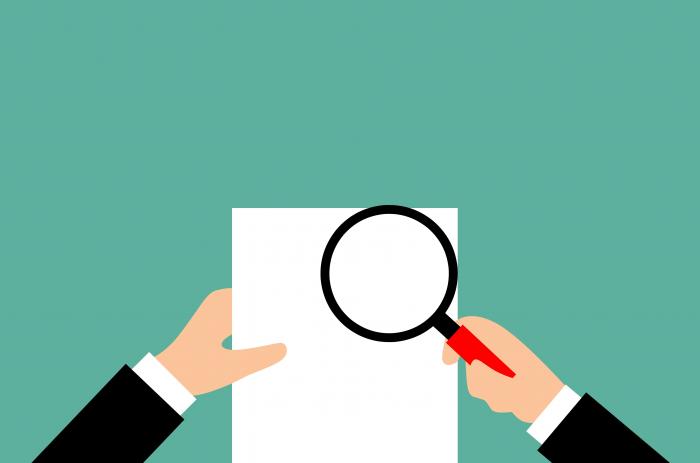 The University of Barcelona is currently leading a Delphi consultation process - core activity of Task 4.3 – addressed to international experts to obtain their insights on theoretical issues related to the social dimension of cultural projects and policies. The first round of the Delphi exercise was launched in June 2021, questionnaires were collected during summer and the analysis of results is now made available.

The first questionnaire was aimed at assessing the influence of variables such as the typology of cultural programme and elements of local context in generating social impact, and at sharing a first set of conceptual reflections on the topic of the social dimension of culture. The results of this first questionnaire will be validated in a second survey, which will go more in-depth in the topics of social impact evaluation and typologies of variables to detect transformational changes in cultural projects and policies.

The questionnaire was made available on EUSurvey and sent to 486 experts in the field of social impact of culture all around the world. After verifying that only valid answers would be included in the analysis, the final number of total respondents was 87(18% of the sample), corresponding to the following different professional profiles:

With respects to the quantitative analysis of the answers, some first interesting reflections may be highlighted. As illustrated in Table 1, when analysing the likelihood of cultural projects/experiences to produce an impact in each of the three social dimensions of the MESOC project (Health and Wellbeing, People Engagement and Participation, Urban and Territorial Renovation), the experts gave high relevance to all the three dimensions, with very slight differences in the responses.

Table 1. B.1. In your opinion, how likely is that taking part in a cultural project or experience has a high capacity to improve health and wellbeing, citizen engagement and participation, and/or contribute to territorial and urban regeneration? (Likert scale 1-6, not likely – very likely)

If we focus on the transformative effects of cultural experiences by functions (Table 2), the activities considered more likely to produce a social impact in each of the three MESOC dimensions are:

Conversely, it is interesting to highlight that the answers that received the lowest scores are those related to the individual and private characteristics of the cultural activity, namely learning, practicing or rehearsing individually some artistic discipline, and reading, writing, drawing, painting, designing, playing, composing...in a private and domestic space. One derived hypothesis could be that these features are considered less effective than their collective and public counterparts in producing social impact because social impact is generally conceived as resulting from a community/group cultural activity, where interaction and sharing are made possible.

It is interesting to note also that individual and private cultural activities received different scores in the different dimensions analysed. For instance, learning, practicing or rehearsing individually some artistic discipline receives higher rates in the case of health and wellbeing (4,20), which could be considered a dimension more related to the individual sphere of impact, compared to people engagement and participation (3,26) and urban and territorial renovation (2,62), that receive relatively low scores.

Table 2. Likelihood of cultural experiences to produce an impact in each of the three MESOC dimensions

The hypothesis related to the likelihood of different typologies of cultural projects to produce different types of social impact in the three dimensions of Health and Wellbeing, People Engagement and participation, and Urban and Territorial Renovation is also explored (Table 3).

Table 3. Relationship between type of cultural programme / strategy and type of social impact 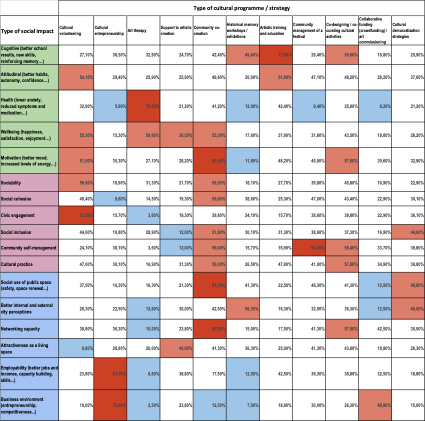 As evidenced in the table, it seems that some cultural programmes are more or less likely to produce a determined type of social impact. For instance, cultural volunteering programmes seems to have a higher effect on civic engagement, or cultural entrepreneurship strategies are more likely to have an impact on the business environment, while artistic training and education appears to favour cognitive improvements. The same can be said in the opposite sense: in some cases, the relationship between the type of cultural programme and the typology of social impact seems very weak, as in the case, for instance, of art therapy programmes and impacts related to civic engagement and business environment.

Regarding the relevance of elements of local context in favouring cultural projects with social impact (Figure 1), experts gave the highest relevance to density, connectivity and richness of local cultural networks and milieux (5,09 out of 6), followed by social consensus on the value of local culture (4,90), creative milieu and atmosphere and availability of public funds addressed to any kind of projects and programmes aimed to generate social impact (4,89 respectively).

Figure 1. Relevance of the elements of local context in social impact generation in the field of culture 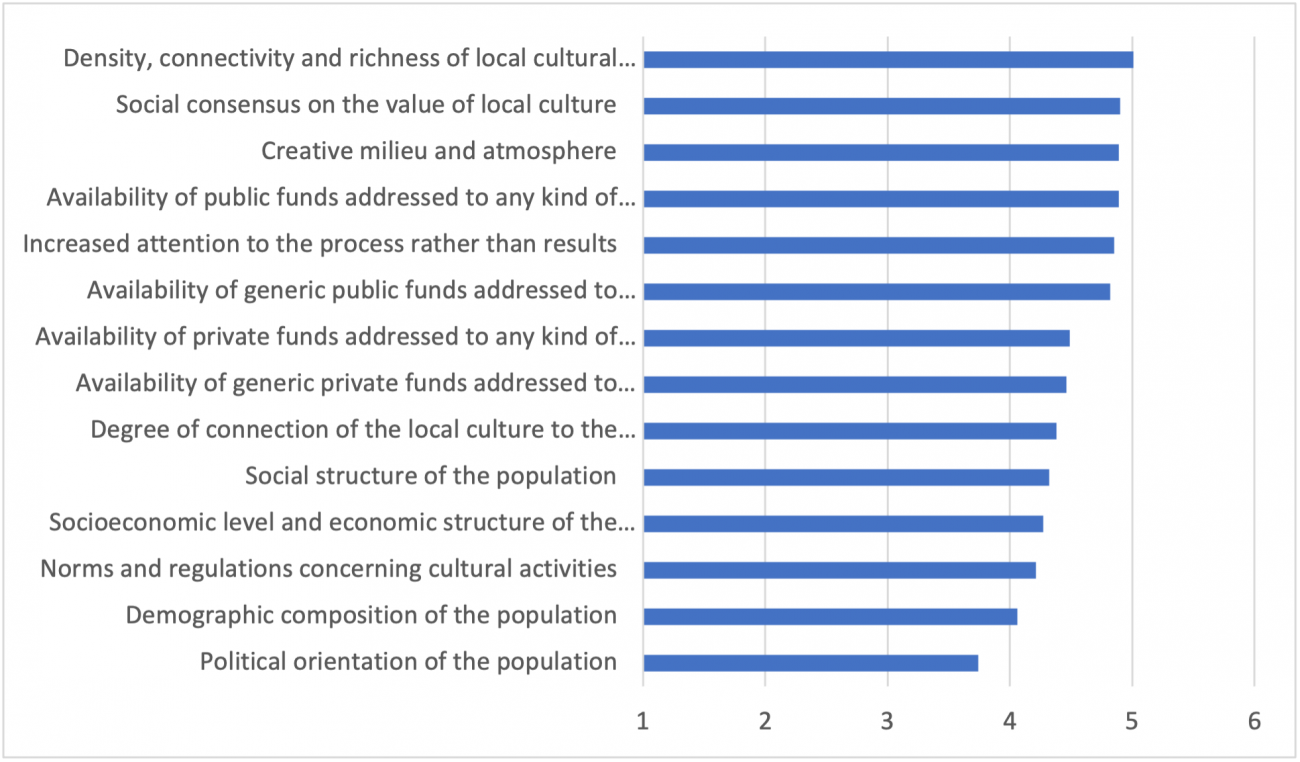 By analysing the relevance of different stakeholders in their role as enablers of cultural projects with social impact (Figure 2), it can be observed that local governments (5,13) appear to be the most relevant agents in the local context, followed by cultural associations (5,10), community organisations (4,90) and cultural venues (4,89). It is interesting to note that health centres and private investors were considered the least relevant stakeholders by the queried experts.

Figure 2. Relevance of stakeholders as enablers of cultural projects with social impact in the local context 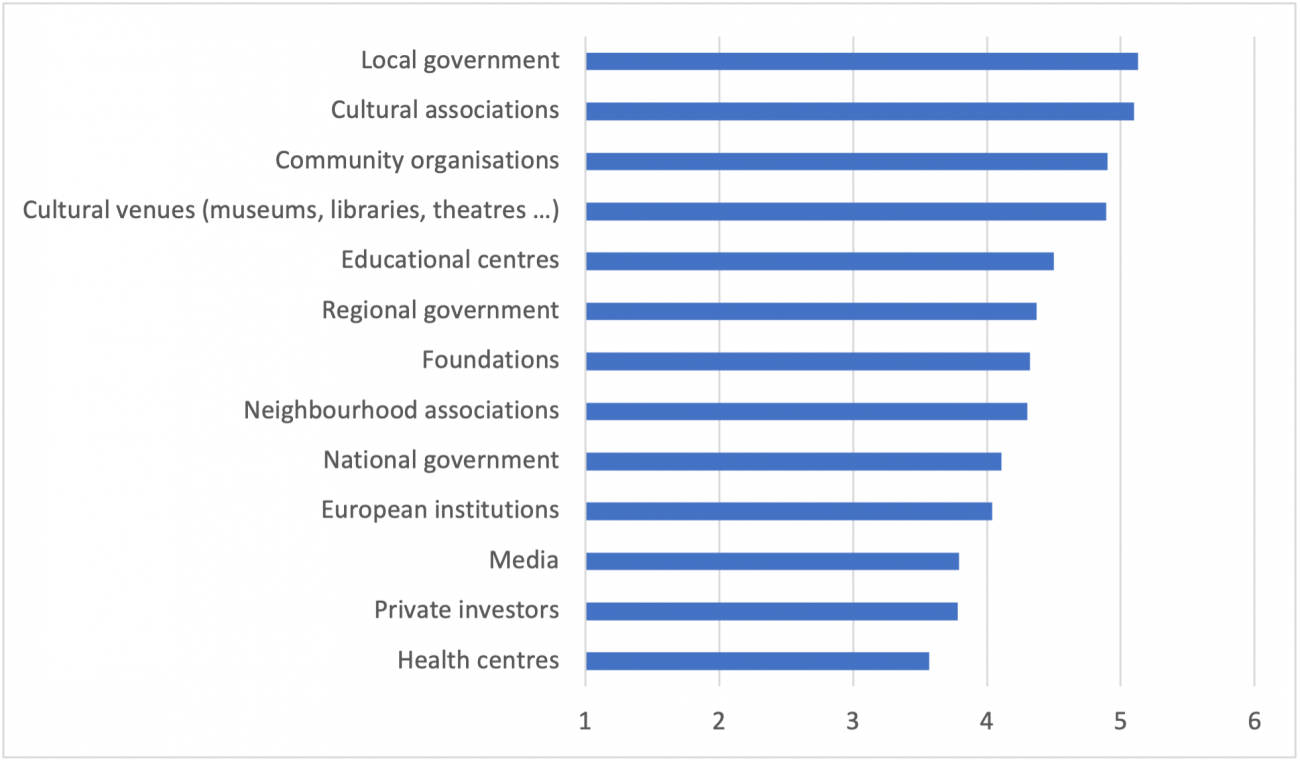 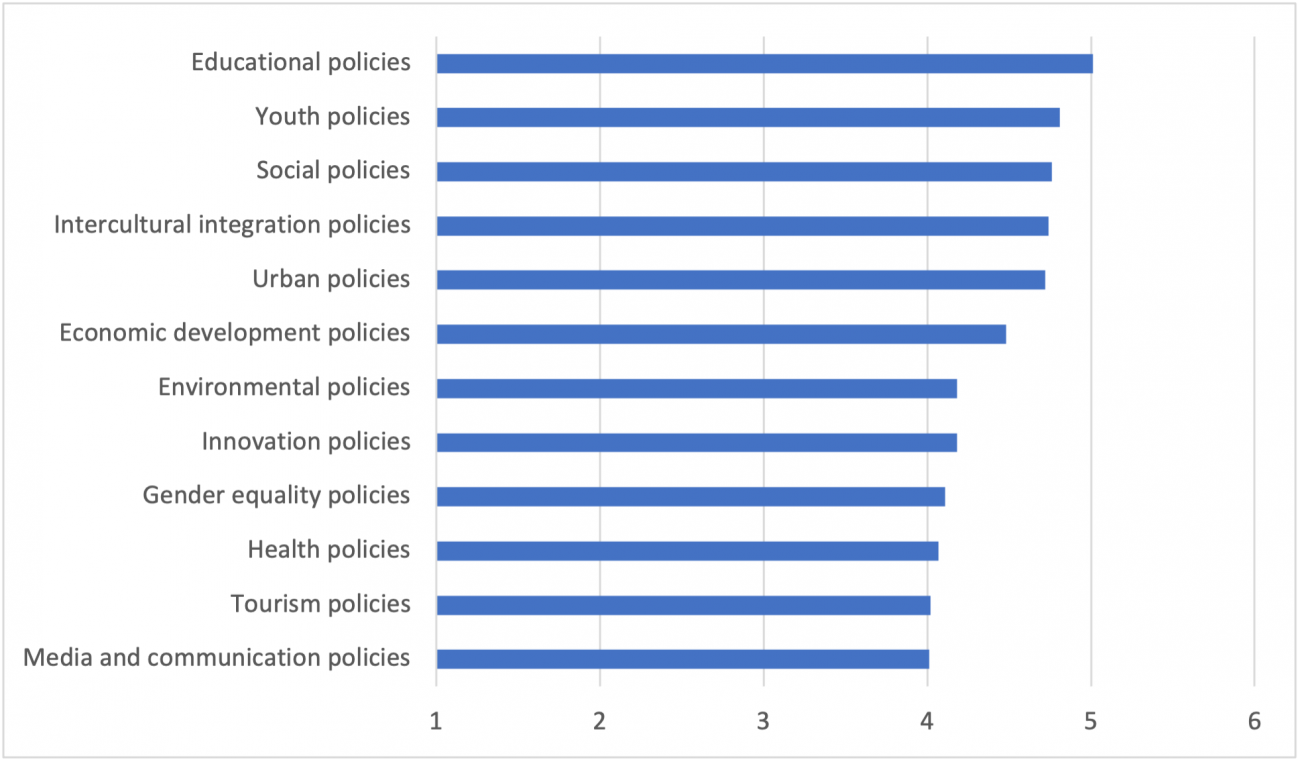 The full report containing the detailed analysis of the first Delphi questionnaire will be made available in the next weeks and will also cover the qualitative aspects of the survey.