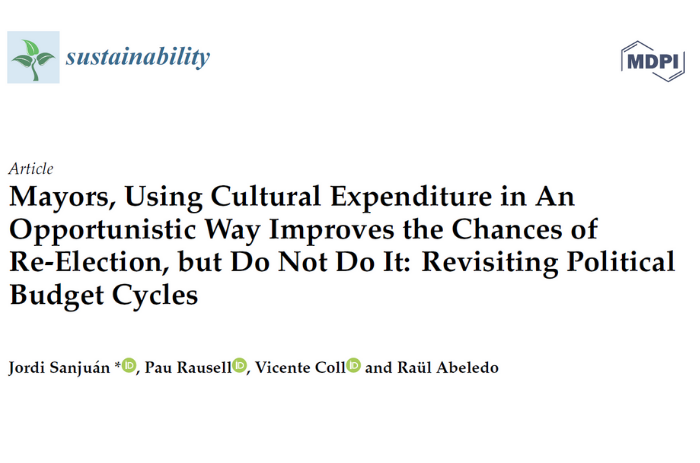 A research by the ECONCULT team of the University of Valencia, published in the academic journal Sustainability, provides evidence that the spending of city councils on culture is exploited in an opportunistic way by the governing parties in medium-sized cities (between 20,000 and 100,000 inhabitants), so that they increase spending in the pre-election year, with the intention of winning over voters.

This is a phenomenon that can be explained by the theory of Political Budget Cycles, which was already formulated by the Nobel Prize winner Nordahus in the mid-1970s. What is new is that spending on culture is one of the most widely used. And, futhermore, the only variation in spending that contributes in a statistically significant way to improve the chances of being re-elected is spending on culture.

The magnitude of the cultural effect is such that, assuming that spending on culture in a pre-election year increases by a third in percentage points of the total budget compared to the previous year (for example, from 6% to 8%), this would improve the probability of being re-elected by almost 10%. Given that the proportion of the budget devoted to culture is relatively small (about 5 percent), one could infer that spending on culture is a relatively cost-effective way to buy the favor of voters.

It is logical to think that, in an election period, politicians in government will try to use public budgets to win over undecided voters. In this way, spending on culture has great electoral appeal, since it is highly visible, relatively cheap -as opposed to other expenditures such as education or health care- and incorporates values that can be used by a wide range of the ideological spectrum, from preservation of lifestyles for conservatives, identity for nationalists, or transformation - creativity and change for progressives.

This finding could be, on the one hand, positive for culture, since it highlights its electoral impact, and gives it, as a sector, negotiating power vis-à-vis the political sphere; but on the other hand, it significantly distorts the need for a certain instrumental rationality of local cultural policy, since it makes it the object of desire of opportunists.

In any case, the article highlights the importance of a little explored area of the social dimension of culture, referring to political cycles, electoral tendencies, democratic legitimacy, governance… These issues are part of one of the three crossover themes that the MESOC project seeks to explore: People's Engagement and Participation. Throughout the project, many more new evidences are expected in this field.

The full article, which details all the research, is published in a special edition of Sustainability journal dedicated to culture in medium-sized cities, and can be found through this link: https://www.mdpi.com/2071-1050/12/21/9095/htm