Researchers of MESOC participate in high-level discussion on cultural statistics 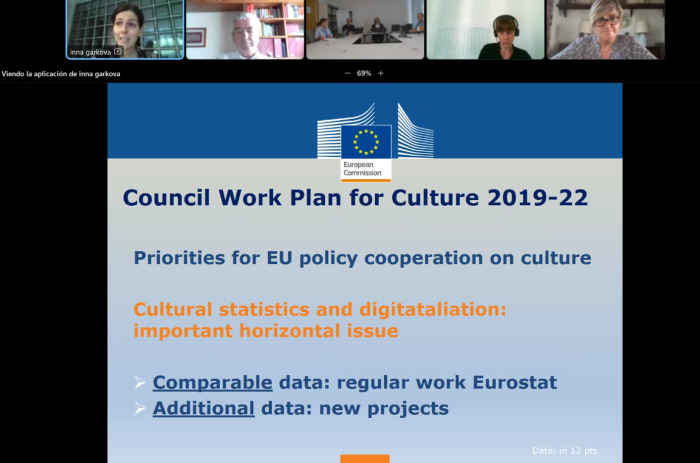 Pau Rausell and Rafael Boix, researchers of the MESOC project, participated in the EUROSTAT working group meeting on cultural statistics, where the updates of the current reference system for cultural statistics were discussed. The meeting was held on 6 July through a virtual meeting with more than 60 participants from the different teams of the national statistical institutes in charge of cultural statistics, as well as different representatives of the Directorates-General of the European Commission. Among the participants was Annalisa Cicerchia from ISTAT, who took part in the consortium's event in Athens in May.

The meeting took place in the framework of the Measuring Cultural and Creative Sectors Project, whose objectives are to

a) To offer an updated definition of the scope of the 'Cultural and creative sectors with a clear statistical definition per single sector (including online services). That can essentially be considered a qualitative exercise.

b) To develop a new methodology for capturing and quantifying online services per sector, whether these are paid services or financed by advertising and by data. And indeed, this effort must be consistent, in terms of classification, with the results of point a)

c) To build a methodology to allow better quantification of CCS and comparability at the EU level of all available data (existing data and new data resulting from the newly developed research, as well as a methodology for its regular monitoring of the CCS in the EU.

d) Provide updated economic figures on CCS in applying the proposed methodology impact of the Recommended Changes in the scope.

The point is that although cultural statistics in Europe have improved a lot in recent years, they still present difficulties in trying to obtain standardised indicators to measure the social impact of culture in aspects that have to do with involvement, effects on well‑being and health or identity and social cohesion.

Within this framework, the MESOC project considers the possibility of connecting with a tentative proposal of a set of statistical data sources (possibly including new ones that are practically and economically feasible). They could complement existing measures of culture's societal value and impacts by adding its effects on personal well-being and health, citizens' involvement and participation, urban identity and social cohesion.

This participation is a further step in need to establish stable contacts with case handlers linked to the capability of developing and communicating policy learnings through the development of solid partnerships and relations between our consortium, its researchers, and all the relevant public and private stakeholders that can help to maintain or expand the outputs of the project after the end of the EU funding.