Following the 2007 European Agenda for Culture, the European Commission adopted a New Agenda in May 2018 to take into account the evolution of the cultural sector over the past decade.

The New European Agenda for Culture provides a framework for cooperation among the Member States and with the EU Institutions, which started in 2019. In this new framework, Member States define the main topics and working methods for policy collaboration on culture through Work Plans for Culture adopted by the Council of Ministers. The 2019-2022 Work Plan for Culture, adopted on 27 November 2018, sets out 5 main priorities for European cooperation in cultural policymaking, complemented by 17 concrete actions with clearly defined working methods and target outputs.

Presented in the form of a Communication from the Commission, in response to a mandate received from the December 2017 European Council, The New European Agenda for Culture with its accompanying Staff Working Document introduces the concept of cultural crossovers, to be used as theoretical lenses for assessing the impacts of culture in different fields such as health and well-being.

In fact, one of the main innovations set forth by the Agenda is the introduction of a distinct, strategic objective named “Social Dimension”, which is about “harnessing the power of culture and cultural diversity for social cohesion and well-being”.

Find out more about MESOC structural model through our Concept Note. 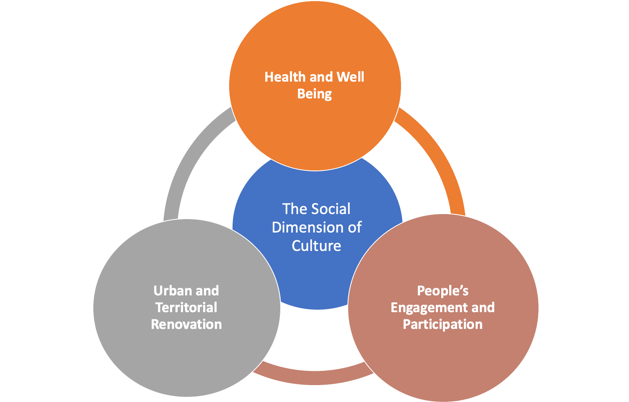