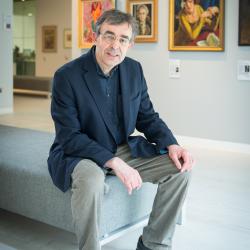 Dr Franco Bianchini is one of the Associate Directors of the Centre for Cultural Value, based at the University of Leeds and funded by the UK’s Arts and Humanities Research Council, Arts Council England and Paul Hamlyn Foundation. Franco is also Visiting Professor at the Sibelius Academy, University of the Arts Helsinki, and a member of the Council of Founders of the Fitzcarraldo Foundation, Turin.

He was Professor of Cultural Policy and Planning - and Director of the Culture, Place and Policy Institute (CPPI) - at the University of Hull from 2016-2020. CPPI was in charge of the evaluation of the processes, outcomes and impacts of Hull UK City of Culture 2017.

From 2007-2016 Franco was Professor of Cultural Policy and Planning at Leeds Beckett University, and from 1992-2007 he was Principal Lecturer/Reader in Cultural Planning and Policy at De Montfort University, Leicester. From 2010-2014 Dr Bianchini was a member of the team preparing Matera’s successful bid for the European Capital of Culture 2019 title. In 2003 he acted as adviser to Liverpool Culture Company on the preparation of their successful bid for the 2008 European Capital of Culture. He initiated, and was a member of the artistic team for, ‘Cities on the Edge’, a project of cultural co-operation between Liverpool, Bremen, Gdansk, Istanbul, Marseilles and Naples (2004-2009). The project formed part of the programme of Liverpool European Capital of Culture 2008.

His research interests range from the role of culture in urban regeneration (with a particular focus on port cities and on European Cities/Capitals of Culture), to cultural diversity and interculturalism as resources for innovation in urban policy, and the development of urban cultural strategies in the context of the current political, economic, health and environmental crises.